OpenProcessing and Rhizome joined forces and setted up a contest inviting artists and programmers to propose their best Processing sketch with this 2 creative constraints: in 200 characters maximum, with no external files.

And it’s exactly those 2 constraints that kept me busy. I already had worked on a project where a program displays its own source code. This time, I wanted one who would display how it responded to the main criteria, having no more than 200 characters, and also test the limit of the the rule about using an external file. Because, this is a question: is a source file an external file to the program? (Others have asked the same question.)

By playing around with the code (and that’s the whole point), other questions came to my interest. What would be the smallest code displaying his character count? What could I add to it, in his form and nature, and still be under the 200 limit? What other elements could I slide in that would speak about the Processing project at large? What are the ideas that the other participants haven’t done yet?

So I ended up with this proposition of a serie of 3 sketches, to be viewed in order, and only on the OpenProcessing website ( applet and source code shown side to side). 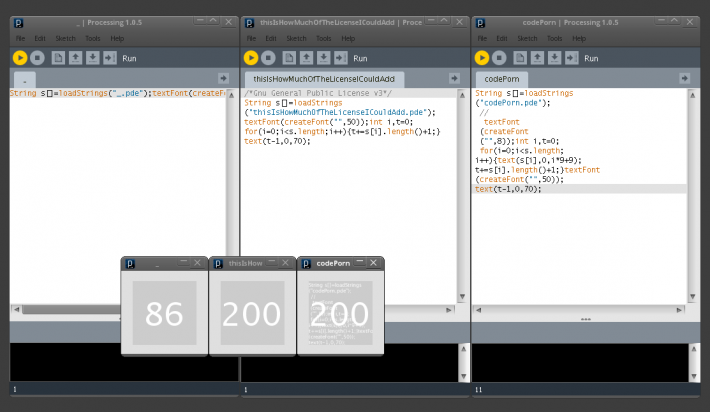 At first, because the loadStrings() function returns an array of lines, I didn’t immediatly realize that I was making a big mistake by not counting the "carriage return" as a character. And it’s after uploading a first serie, calculated by the site, that I understood where I was wrong. I first thought for a while that it could be an interesting question on what should be the method used for character counting. Until I verified that "Carriage returns" are actually control characters in the ascii and unicode specifications.

So, for documentation purpose only, the first submitions (with errors): 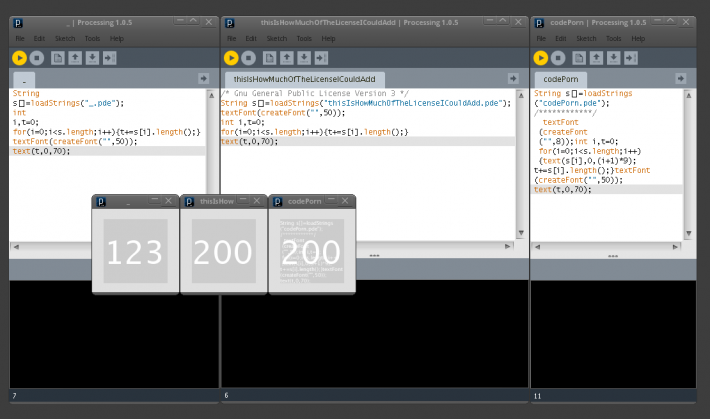